Click here to view a portfolio of our most recent work.

(or what he will admit to)

This native Californian began his photographic career at the age of 8 years old when he borrowed his mother's 1920 Kodak Brownie II camera and did a Black and White photographic study of his complete collection of G.I. Joe dolls posed in various color-coordinated commando gear outfits on the front lawn. He has fond memories of the long hours spent meticulously arranging the G.I. Joe battalion jeep with detachable trailer, battery-operated search light and oversized battle cannon! (If you've been to any of his photo sessions you'll recognize the same meticulous perfectionism today!) 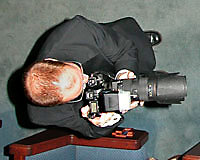 In high school Dan enjoyed photography classes and had photography competitions with his neighbor and best friend David. David's father was the high school photography instructor and had a complete professional darkroom setup in his garage so the expensive photographic supplies and lessons were free!

Dan's first 35mm camera was a 1942 Kodamatic he bought at a pawn shop for $10 in 1971. There was nothing automatic on this camera, no flash, no light meter, no batteries but Dan not only figured out how to take quality photographs in all kinds of lighting conditions, but would also do his own developing and printing in his own darkroom.

As a journalism major in college in Utah, Dan continued his photographic education and received top-honors in his class for his assignment portfolio. He is an active member of the Wedding Photojournalism Association (WPJA.com) and many local and national professional photographers organizations and has become one of Florida's most sought after wedding photographers.

Dan sells note cards and fine-art prints nationally, he has created his own website and has many publications to his credit including features in "The Knot, Wedding Pages" , "Premier Bride" , "Wedding and Reception Services Magazine", "The Golden Isles" and "Southern Living". He runs his photography business out of his historic (84+ yr. old) San Marco home in Jacksonville, Florida. He is best known locally for his more than 15 years of volunteer work with the monthly community newspaper "Out in the City". He does freelance work for "The Water's Edge" and "TLW" magazines.

Although Dan enjoys nature photography, he spends most of his time photographing people in photo-journalistic style location portraiture and can often be seen out and about covering special events, Weddings, Holy Unions, Bat & Bar Mitzvahs. He has retired his 1942 Kodamatic (now a decorative accent in his study) and uses 5 top-of-the-line cameras (including digital) with 12 lenses to achieve his creative desire and one old-fasioned1903 Kodak Century 8x10 wooden view camera!

Not long ago Dan's mom gave him her Kodak Brownie II (now another decorative home accent). Dan no longer has his G.I. Joe collection, (it was eventually destroyed by his 2 brothers and sister) but he does have the photos he took that day on the front lawn 40 years ago along with every negative he has taken since and today he is still selling some of the photos he took in 1971 with the Kodamatic.

Prior to becoming a full-time photographer he: grew up in California, used a Kodak Brownie II, had a paper route; was an eagle scout at age 13; was a stock boy at Rexal Drugs; owned a Kodak instamatic with the cube flash; had a job washing windows; was a lifeguard then swim instructor then boating and canoeing instructor and then the activities director at scout camp; used a Kodak 35mm rangefinder and shot Kodachrome slides; was a missionary in Canada; owned a Polaroid SX70; drove a van for Kodak; water-skied and snow-skied and never broke a bone (sorry Sonny Bono); worked as a janitor in a candy factory in San Francisco (ask him about jelly beans and shellac); cleaned floors in a fine arts center; bought one of the first all black Nikon FM2s;  worked in a publishing house; worked for the Daily Universe (not to be confused with Clark Kent’s job at the Daily Planet); manufactured replica Gatling guns; had two children; owned a printing business; was an AP stringer; was the cameraman, stripper and plate maker at a large print shop; sold: greeting cards, copiers, file folders and printing paper; shot a 1906 8x10 Century One camera; was a sales trainer and a sales manager; owned a Hasselblad (and shot 160 rolls of medium format -24 exp.- film every month); doesn’t seem old enough to have a grand baby, but somehow does.  He has operated his home studio in the same San Marco location for the past 15 years. He has successfully photographed over 560 weddings in 5 different states –including Alaska-- without a single problem ;- ). Although he’s shot a couple good pictures in his life, he hopes one day to take one he really likes.

This complete website (www.danharrisphotoart.com) and all content (including photographs and verbiage) is copyrighted and cannot be used without permission. ©2012 Dan Harris PhotoArt All Rights Reserved.